This October I have a joint Visual Art Exhibit with Leah Murray Entitled "Emergence". I just unveiled this piece at that exhibit (Thank you to those who attended our opening reception on Zoom!!). The idea for this art piece has been percolating since the beginning of the Black Lives Matter Movement in May.
I was not sure how to speak to the issue of systemic racism being a white women - I chose not to. I decided to educate myself, listen to BIPOC voices, and to learn about my own privilege. Being born this colour and in this part of the world I have had the privilege to not experience racism first hand, to not have to feel panic when I see a police officer, or to wonder if I got passed over for a job because of my skin, or feel like was I afforded an opportunity because of a company wanting to appear progressive. I have been learning the difference between being "not racist" and "anti-racism". I did grow up in a place and ideology that valued being colour blind. Where I live we do have a lot of diversity, I grew up with a lot of south asian and asian kids — but looking back at my education I know I was taught that "Racism=Bad" but the fact that history was taught through the lens of the colonizers and white washed was problematic and the "All lives matter" sentiment follows that colourblind mindset - of course everyone SHOULD be seen as equal, and my personal circle has always treated everyone - regardless of background or appearance with love and respect. However, the reality is that in the systems that order and run the world, we are not all equal - there are groups of people who are oppressed and dehumanized right now. If you did not cry or feel a swell of terrible emotions when you saw the video of George Floyd being murdered by police - it is time to evaluate your own bias and prejudice. If you did cry and feel the horror in your guts witnessing that, it is time to learn and time to find your voice in the fight. There are no simple answers, but having all eyes on these troubling issues helps, as does being wiling to speak up for truth and equality.
Those were the thoughts in my mind when preparing to make this art piece. It took a long time to create this, it makes me feel very vulnerable sharing this part of myself, I know not everyone in my life agrees with these ideas or the fact that I am a much more liberal left leaning human in my adulthood. But to me that made it all the more important for me to press through and process this.
I started this art piece with a polarized background using Republican and Democratic colours and used my hands to move the colours toward each other with chaotic movement. The red is on the left because in English we read left to right and so our association is that the past is left and the future is right, and there's a lot of bloodshed in world history related to colonization and slavery and my hope for the future is to see the world move toward shedding our prejudice, reconciliation and true equality. I personally believe that the political left aligns with those ideas.
I sealed that layer with resin and then did some stream of consciousness writing of me processing this topic (along the lines of what I have shared here). It was written using a white grease pencil to represent that my voice comes from a white perspective.
I covered my writing with another layer of resin and then drew the final portrait. I chose this woman of colour, as black women not only face racism but also gender discrimination too. When I found the stock photo that inspired this I knew that was the perfect image as her gaze to me was one of fierce confidence that mirrored the movement — that "we're not going to back down" sentiment — that "how many people have to die before the world wakes up" attitude. I know I didn't capture her likeness perfectly, but I think I captured the gaze and intensity that I was hoping for.
The fact that she is covering my writing is my way of communicating that my voice and perspective is not one that deserves attention in this fight, we should be supporting and listening to black voices when digesting this issue, it is time for us to amplify those voice.
To that end I want to use this art piece to support some local charities. If this sells, after I cover my materials cost and time, I will be donating a lot of the proceeds to blacklivesmattervancouver.com and hogansalleysociety.org
I would also like to recognize the photographer of my reference photo from pexels.com (the site wouldn't allow me to donate to him directly, so the least I can do is credit him!)
He's an Art Director from London UK, Ezekixl Akinnewu, and his body of work is beautiful!
This piece also marks an interesting point for me as a visual artist — with the discovery of Oil Pastels and Art Resin and leaning back into portraiture, I am feeling inspiration and momentum. All my experimenting has lead to a place where I truly love the process and the outcome of my work - and that is really satisfying. I am excited to use my artist's voice to speak to more issues that are important to me, that make me feel vulnerable. But for the next little while I will likely do some work that is more light hearted as I process the next politically charged art piece. 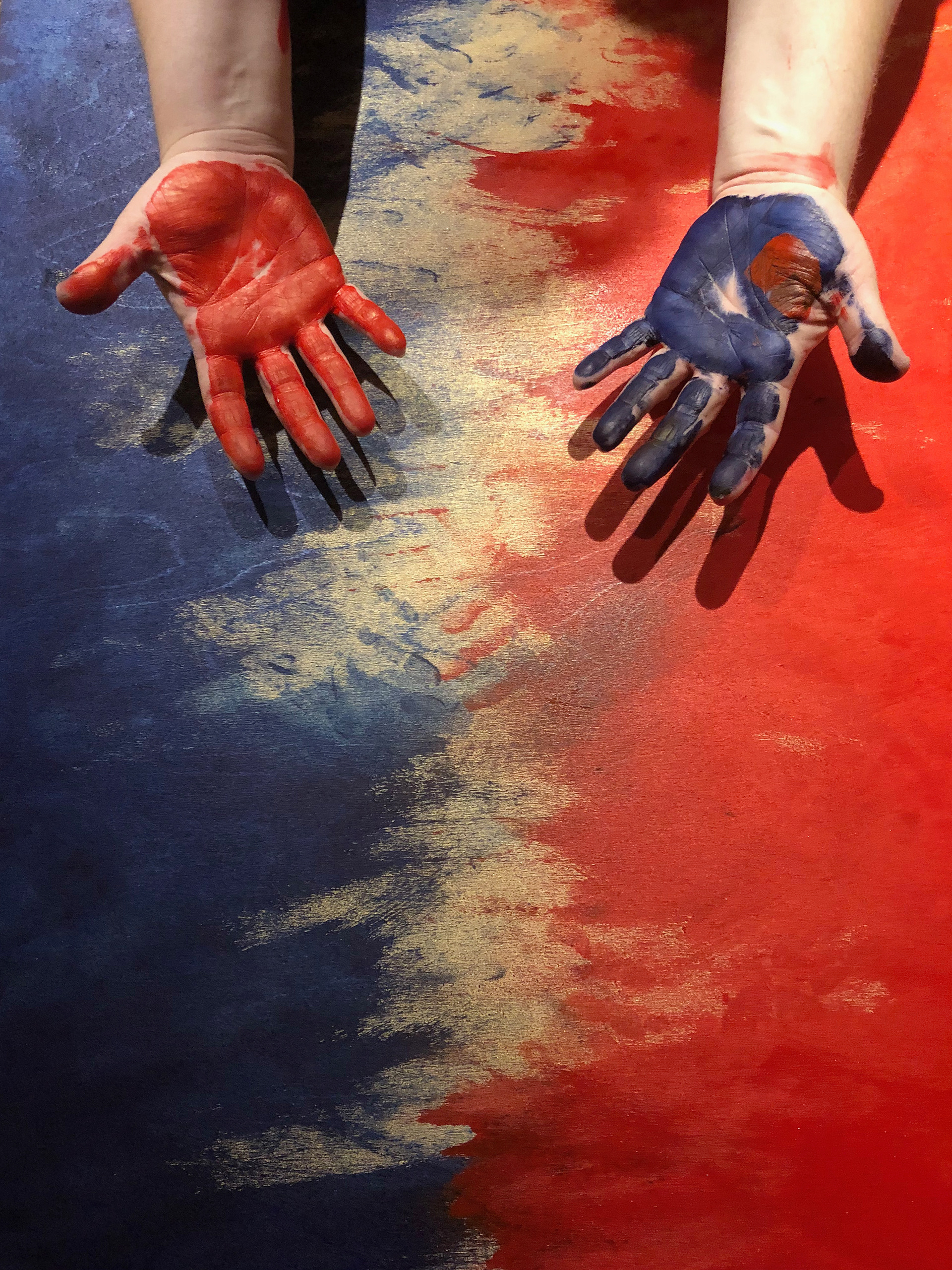 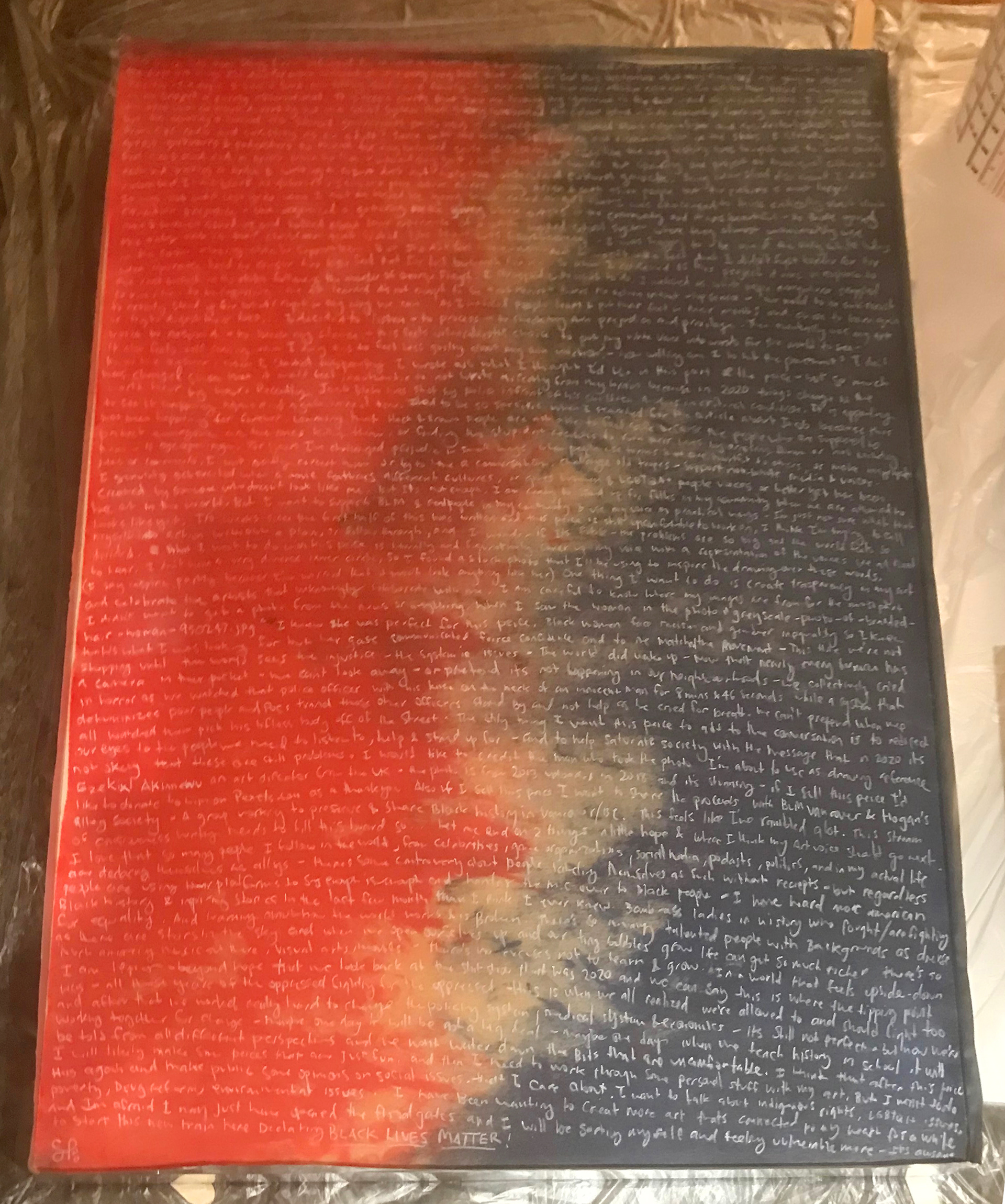 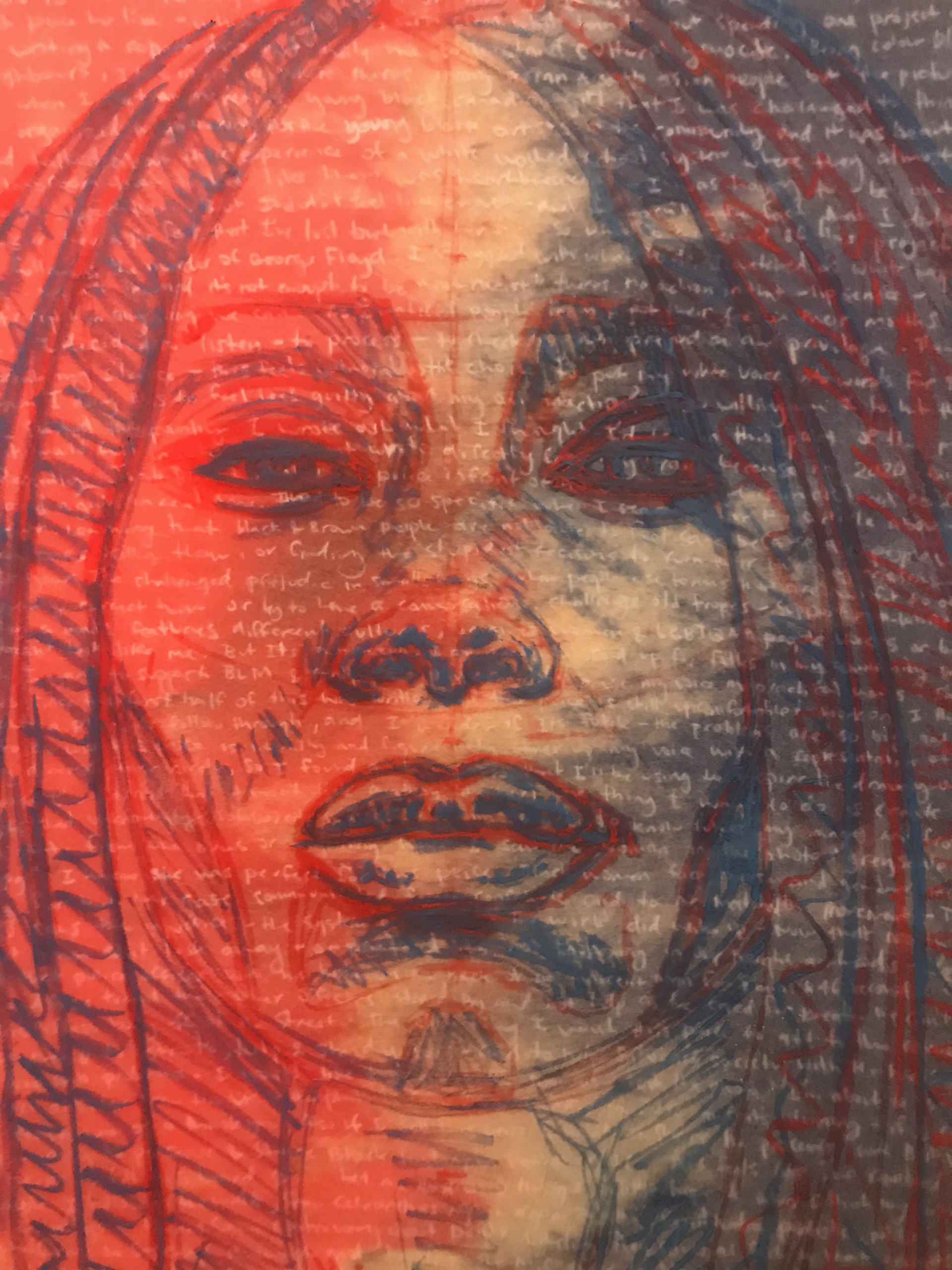 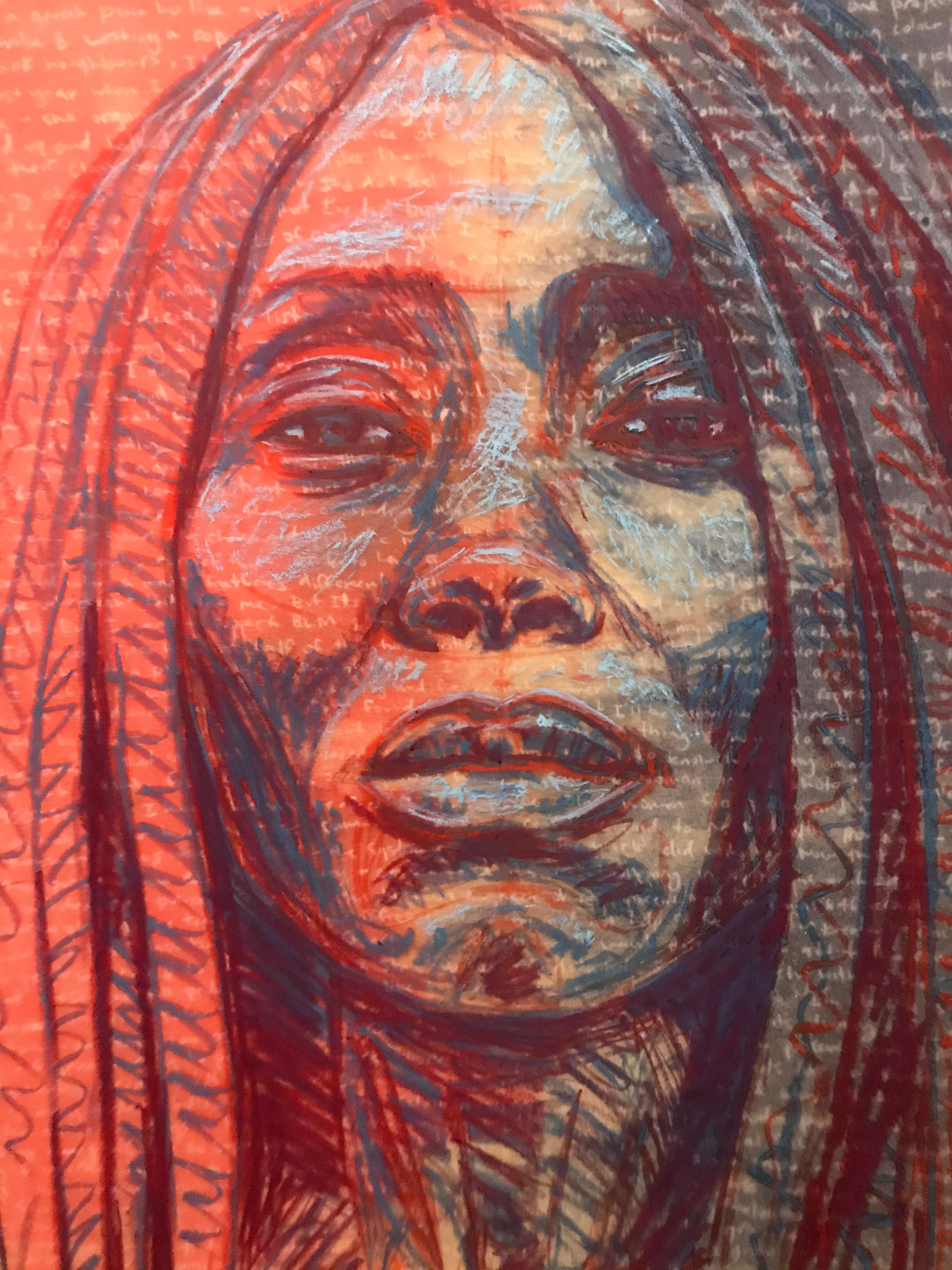 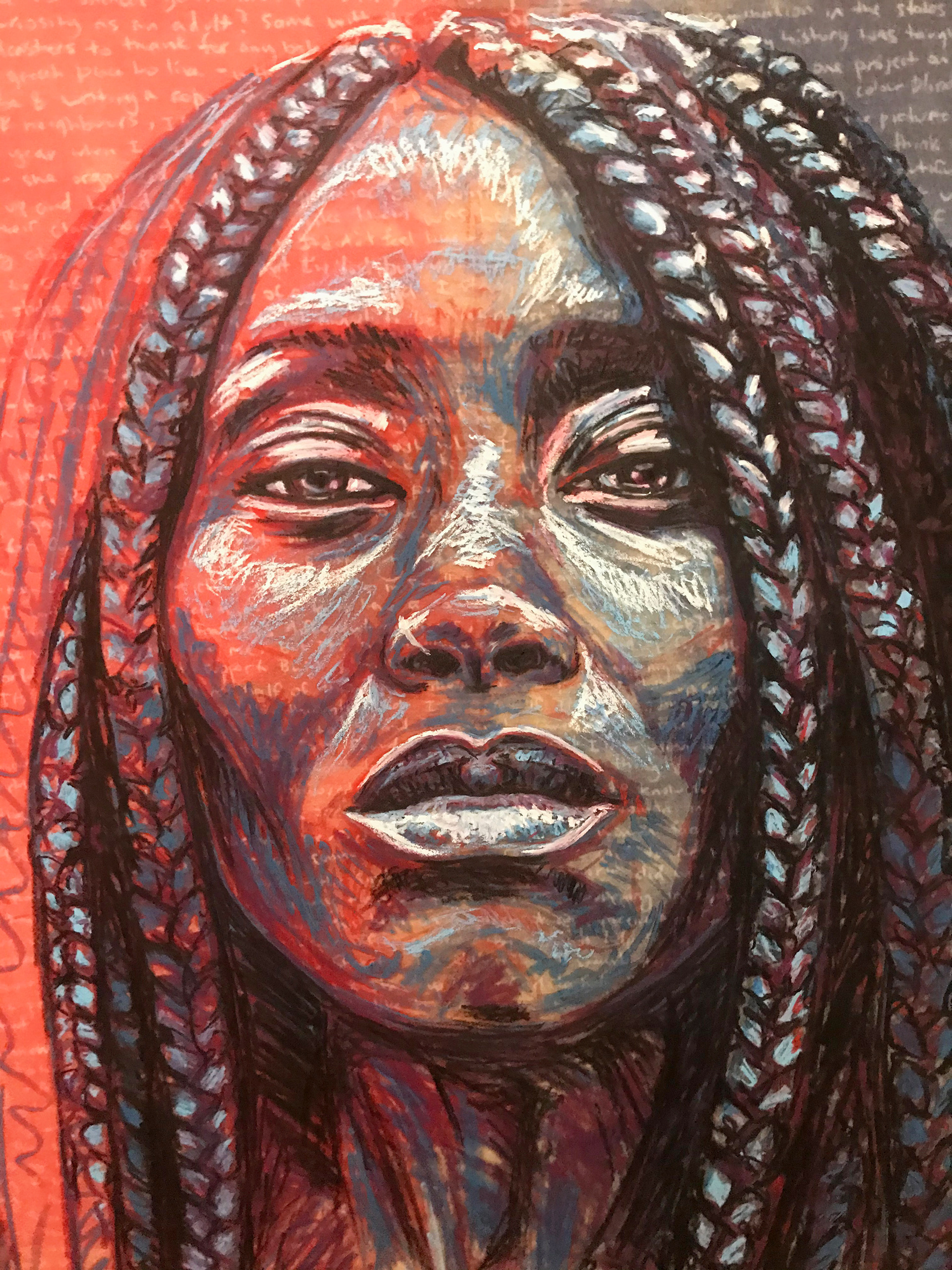